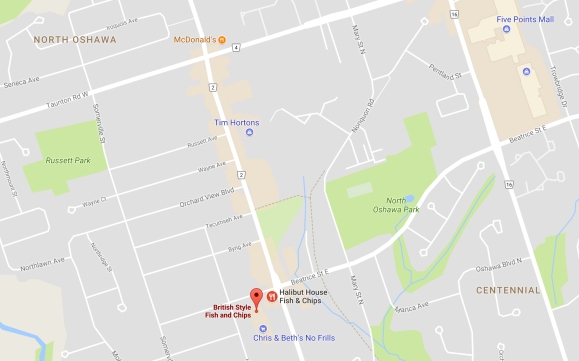 Kyle and I woke up, craving some fish and chips. Normally, we’d stop by our local Halibut House, but we felt like trying out somewhere new. British Style Fish and Chips was conveniently located right near our favourite Halibut House, so it wasn’t super out of our way either!

We walked into the restaurant and it was fairly small. It had around 10 tables total, if I remember correctly. The décor wasn’t super memorable. I believe there may have been some pictures on the wall, but I don’t remember what they were. I assume something to do with fish, like fishing boats or something similar. It felt a little drab, but I’m not one to judge a restaurant on décor. Unless it’s terrible. The décor in here wasn’t horrendous; just very simple and a bit outdated. The chairs and booths were comfortable and large enough to seat the amount of people they were supposed to. The kitchen wasn’t hidden away like in most restaurants. We could see the chef cooking from where we sat.

We were greeted by a man (presumably the owner) who told us to sit anywhere. Since there was no one else in at the time, we could literally sit anywhere we wanted. He came up to us, handed us menus and explained the specials. Once we ordered he got us water, which he refilled at least 2-3 more times while we were there. He was very friendly, and checked up on us a few times to make sure we were doing okay. I found it a bit odd that he was the only one working. Even though it was in more of their dead hours, I still half expected to see at least one waitress or another chef.

Both Kyle and I ordered the $6.99 Haddock and Chips special. Coleslaw wasn’t included with the special, so we agreed to pay an extra $1 each for some. The fish was really good, though Kyle found it maybe slightly undercooked, if at all. The fries were freshly cut and delicious. But the real star was the coleslaw. It’s some of the best we’ve both ever had. I have no regrets in paying that extra $1; it was definitely worth it!

As with every restaurant, some things are more pricey than others. We went with the special because it was one of the cheaper things on the menu, yet it was still absolutely delicious! The prices on the other menu items were still pretty fair, though.

Though the restaurant looked a little dated and drab, the food made up for it. Both Kyle and I agreed that the $15 we spent here was well worth it. Looks like we found our new favourite fish and chips restaurant!